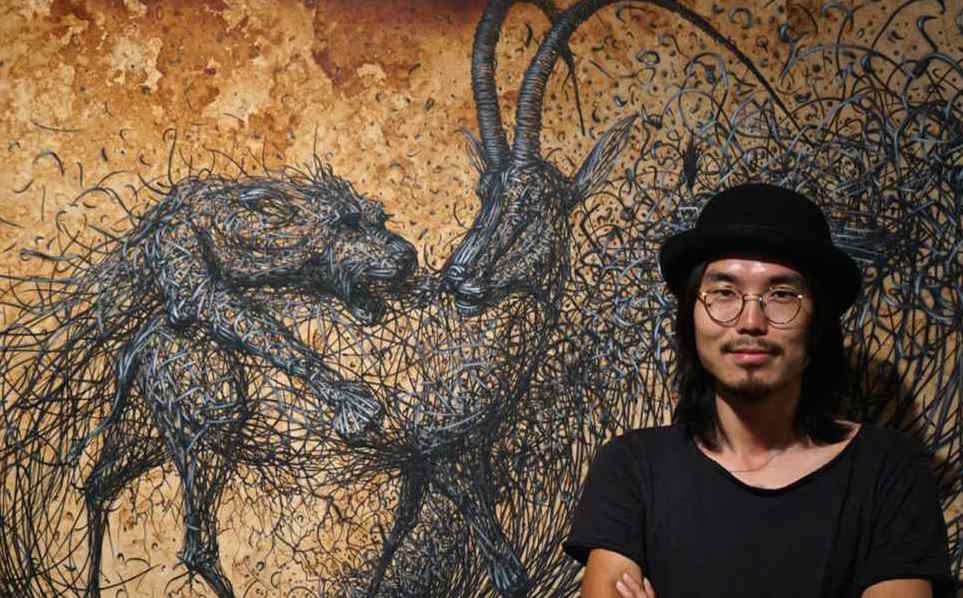 Hailing from Wuhan, eastern China’s most populous city, Daleast is an artist who attempts to depict the tense relationship between the natural and artificial, the organic and synthetic, forming a bifurcated aesthetic which brings these seemingly irreconcilable binaries into a quite beautiful coalescence. Relocating to Beijing in 2008 and resided in Cape Town, South Africa in between 2010 to 2015, Daleast’s trademark style, his metallic, monochromatic, sculptural aesthetic can thus now be seen all over the world, all the whilst retaining a strong influence of the Eastern philosophy he holds so close. Inspired as much by the internal immateriality of dreams and emotions as by the external physicality of material and form then, Daleast’s skeletal, spiraled images attempt to bring his part-animal part machines to life, endowing them with an emotion and spirit which surpasses their purely illustrative qualities.

A founding member of the Wuhan based artist collective Chirp, one of the first groups in China to merge experimental public art, Daleast has been highly active in the burgeoning Chinese public art scene since around 2004. Studying sculpture at the Institute of Fine Arts in his home town, although quitting one year before completing his degree due to a difference of opinion in terms of the schools teaching methods, Daleast continued his art practice after moving to Beijing in 2008, then moved to Cape Town on 2010, left his residential base in South Africa in 2015. Since then Daleast has been going on a walkabout, traveling in between the Himalaya region and the other continents.

Daleast’s current work quite clearly shows the fusion of his illicit and institutional education, the two arenas naturally converging to form his three-dimensional, wire-like aesthetic. Half robotic and half biotic then, the contorted metalized creatures he depicts aim to reveal what is behind the pure surfaces (a technique which he learnt whilst creating his sculptures), uncovering the    foundational frameworks that hold the physical world together. Showing his love for the vitality of the animal world, the creatures who for him most clearly show the true “condition of the world”, Daleast thus creates a fantasy in which the natural and synthetic are “mixed into one thing”, these mongrel beings attempting to show the beauty rather than horror that can emerge out of this relation.

Putting his art into public space so as to share his “experience and emotion with people”, not to tell them “about right or wrong” but simply to be a mirror which can reflect the world as we see it, Daleast’s work, his synthesis of the man-made and the biological, attempts to confront us on conceptual as well as spectacular levels, forming a unique pictorial interpretation of a half mechanic half organic world.